I don’t know whether to consider this a magazine credit or anthology credit, so mark them as both for now, I suppose.  I’ll have a SF and Fantasy-mixed tale coming to a fairly new bi-annual trade paperback anthology-magazine called Shelter of Daylight by Sam’s Dot Publishing.  They’re published every April and October, with a dash of poetry and art.  Edited by Tyree Campbell.  And yes, this officially puts me on the road to 400 publishing credits sometime in 2010. 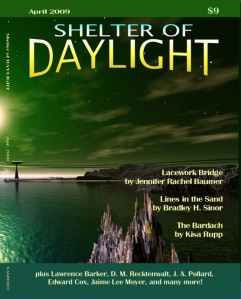 I’m not in the issue above, however, if you’d like to sample it: