This project has turned up some of the most professional and promising stars of speculative fiction today, and you can Pre-Order it now from Cowboy Logic Press.  The hardcover is a gorgeous beast — a feat in modern, satirical science fiction.   Trust me, with more than 110,000 words and 24 stories set in futuristic societies, post-apocalyptic dystopias, and featuring dozens of speculative characters, you’ll want to pick this baby up for your collection! And, when the time comes, get FREE SHIPPING when you order it from Amazon.  Full contents and author lineup below… 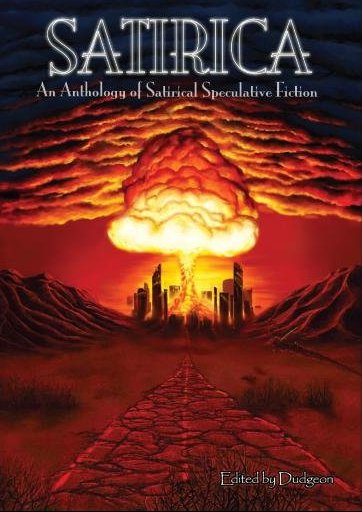 1. Imagine
The collection opens with a sublime alternate history by Edward Morris, in which we learn what our world would be like if Ronald Reagan had been assassinated by a disgruntled rock musician whose career he had destroyed.

Tomas L. Martin takes us on a surprising journey into an alternate present, in which a young English soldier yearns for a glimpse of true sorcery in the war in Iraq; if he can survive the experience.

In the first of two stories, David Thorpe offers up a disturbing and surreal satire filled with social commentary on multiple levels, far beyond its surface theme concerning designer drugs.

R. J. Astruc provides us with a thought provoking examination of the senselessness of war, in which tiny green aliens fall like snow from the skies. But are their intentions peaceful or malevolent?

A soldier returning from war abroad encounters and befriends a death robot. What happens when he discovers that it is responsible for his fiancee’s murder? Victor Giannini provides us with the startling answers in the first of his stories.

John Parke Davis offers up a dark examination of child soldiers in an Africa in which the Globalista forces have retreated from whence they came. But do those who remain any longer know what they are fighting for?

Two young freedom fighters seeking refuge behind the lines arrive upon a space station now in enemy hands. In a true satire for our times, Bill Housley describes a brother and sister’s struggle to escape from the shadow of their terrorist past.

In a quirky satire filled with social commentary, Steven J. Dines takes us on a journey through the future of road rage, and government efforts to quash it…sort of.

Joshua Allen examines Miss Gohrman’s fate when the representatives of a newly formed police state knock upon her door. But are they any match for a little old lady whose favorite cat has just been killed?

In his first story, Dudgeon examines a world in which a young gang member struggles to understand the unfortunate truth, that religion truly is an “opiate for the masses.”

In a tale of psychological horror, Gary Cuba examines the unusual life of a bibliophile who is prevented from reading by an extreme form of dyslexia, and the lengths to which he is willing to go to create a book of his own.

Mike Philbin relates the story of a loner’s transformation into a pet fetishist, as he searches for meaning in a world where humans have become “a grid of drug-softened pulp being squeezed out of a factory’s rectum like societal spaghetti.”

In a fascinating satire of the future of gaming, Kevin Spiess takes us on a surreal journey through designer drugs and virtual reality, in which the line between game and reality blurs to gray.

In a captivating story filled with vivid imagery, Roger Haller examines the nature of crime and punishment in an alien society, where one’s rehabilitation may take more than one lifetime.

What happens when you awaken with blood on your hands? Jason K. Chapman provides the answers in this dark examination of a new form of cybernetic prostitution, in which a “Mario” struggles for his life and freedom.

Sometimes taking a day off can be the best career move you can possibly make. Dan Kopcow explains in a delightfully funny satire of the corporate world, which is laced with so much irony and coincidence that a more detailed review could not do it justice.

David Thorpe’s second story provides us with a dark and cautionary tale of nuclear apocalypse resulting from the “peaceful” uses of atomic energy. But who will survive to tell the tale?

18. The Ambassador of Hate

In this dark satire concerning the psychology of interplanetary travel, and the politics of social control through drugs, Paul Mannering examines the nature of both madness, and revenge.

In a chilling examination of the effects of desperation on society, Lawrence R. Dagstine takes us to a dark future in which population control measures have become so extreme that they can turn family against family.

A surfer dude’s untimely demise is just the beginning. Victor Giannini’s second story takes us beyond fear, suffering and superstition, in search of the ultimate truth concerning the enigmas of life and death.

21. A War Beyond War, and I Am the Only Soldier

In a brilliant satire of Christian mythology, we journey with Anden Sharp to 13th century France, where a young monk is called upon “for a work even more important than Our Lord’s.” But this is just the beginning in the eyes of those around him.

Who will survive a trip clinging to the world cliff, looking down upon the madness of Hades below? In this dark tale of Social Darwinism, Dan Marcus provides the answers, and they are not what you expect.

Roger Haller’s second story is a delightful little satire with a twist: the tale of Earthers’ return to their slowly recovering, ecologically devastated planet of origin in the far future. But do they deserve a second chance?

Finally, a young man who embarks upon an unconventional vision quest gets more than he bargained for in Dudgeon’s second tale. We join him as he struggles to come to terms with the shocking truth concerning humanity’s future…and his own.